What You Need To Play DIE Beta 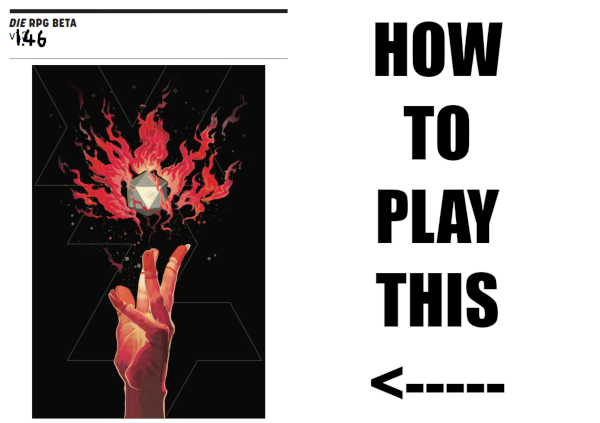 When doing the quick update for DIE beta, someone on the DIE Discord asked me an obvious question.

What do I need to read to actually play the DIE beta?

Good question. We’re in a place where we’re in a tangle of various editions, many of which including useful material, none of which is entirely sufficient.

Anything in the DIE 1.46 beta over-rules anything in the manual. You may find some useful guidance in the Rules section of the main manual, but the cheat sheet is good enough for you.

If you want to convert pre-1.46 statistics into the present-edition statistics, you just reduce all Difficulties and Defences by 1. (So Difficulty 1 is Difficulty 0). The only change that may trip you up when running the game as described in the first encounter, where you should instead run with as many lesser fallen as there are players.

All the other Beta contain useful material, but none of it is essential. The Arcana is likely most useful if you want to generate your own worlds, as it describes a bunch of other methods. If you want to try limited advancement, that’s described in the 1.3 arcana. That also includes a fairly solid one-off scenario (“Do You Remember The First Time We Killed A Kobold And Took Its Stuff”)which holds your hand through it a more than what’s described in the main manual.

Hopefully this clarifies things a little.

TL;DR: Download the Main Manual and the Current Sheets and you’ll be fine.

The RPG Beta of the Image Comic Series DIE.